There's no better way to experience a performing art than to see it live, and to see it by the best in the business. Hangin' out with the band after the concert is an added bonus. Welcome to a short introduction of Hawaiian born Willie K, and a few other of the most talented people I've every had the pleasure to meet.

A few weeks ago I got a call from one of my oldest friends in Japan who now performs in a Hawaiian music band. Mike had organized a small-venue tour for a Hawaiian musician, Willie K. One of the concerts was near where I lived, so he invited me to go. It was amazing. And not just Willie K, but all of the other people who performed on stage. Maybe it's because I didn't know Willie that I went expecting just to see some "Hawaiian music" -- but the concert was so above and beyond any of my expectations -- I'd have to say that I'm one of his his biggest fans now. And not just him, but everybody else in the concert.

Willie K
Both me and a Hula dancing friend who went with me to the concert were blown away by the performance. It included Hula, traditional Hawaiian music, amazing Christmas music, opera (Nessun' Dorma -- one of my all-time favorites), all topped off with an amazing rendition of Hotel California. Willie is amazing on stage. He can play any genre and sing any style -- all insanely well. What a voice! Of all the songs, my favorite was Somewhere over the Rainbow. I couldn't record the concert last night, but here's a clip from one of his older performances. 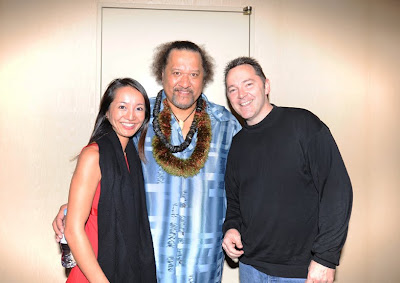 Natasha Oda
OK, there's nobody in the world who doesn't like Hula. It's beautiful to watch. But when my friend Mona heard that Natasha Oda was performing, she said it would be amazing. It was. All of the Hula styles were elegant and soft. Really breathtaking stuff...and I mean that. I was just sitting there completely still asking how somebody can move that gracefully. This is a clip of Natasha from when she won the Miss Aloha 2001 competition. It's a much faster style -- and it's just sick how good this clip is. The music and dancing go full blast from about 1 minute in, so keep watching. I guarantee you'll play this clip more than once.

After the concert, I was lucky enough to go with the whole group to Outback for some beers (and by some I mean too many). Super nice and down to earth people. Willie sang a couple of songs right in the restaurant with his ukulele -- amazing. Of course the staff were freaking out worrying that it might "bother the other customers." This is coming from a restaurant where the staff belt out "Happy Birthday" 15 times a night -- which IS truly annoying. Anyway, the customers loved it. Everybody was clapping. Except the restaurant manager, who was too uncomfortable to clap due to the stick up his ass.

Anyway, mahalo Willie, Napua and Natasha for an amazing performance. I hope you can make it back to Japan soon! And thanks to you Mikey for the invite and for doing such an amazing job organizing this tour!!

One more for the road...