Japan Nuclear Crisis...Part 2, coming soon to a reactor near you!

This NY Times headline says what most of us in Japan already know -- that the corruption and lack of regulation of nuclear power stations such as the Fukushima Dai Ichi plant (map) is probably to blame for this current radiation leak and near complete disaster. And more will probably follow.

Be sure to check out the quake map video at the bottom!

Japanese Officials Ignored or Concealed Dangers.
The title of this article says it all. It was in the NY Times online May 17, 2011. It talks about a pattern of ignored warnings or defeated lawsuits attempting to shut down dangerous reactors by the power companies and the Japanese government. 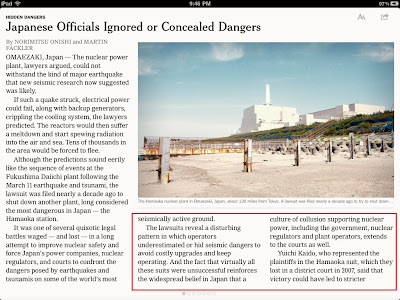 This article comes as no surprise to anyone in Japan. Nobody trusts "officials" or the big corporations. How can we after repeated scandals where a company will typically deny some obvious wrongdoing, like tainted milk for example, until a few people die and it's proven beyond a doubt that the company was responsible. Then a few CEOs cry and publicly apologize. Then I guess they draw straws and the unlucky one or two invariably commit suicide to show how really really very sorry they are. And life goes on with the big guys screwing the little guys as SOP in Japan.

In this case, however, this lack of regulation has resulted in a nuclear disaster as bad as Chernobyl. They're still dumping radiation into the ocean at Fukushima...and most people think we're lucky that this is all that happened. In a country that is constantly getting large earthquakes, this scares the shit out of me. Best guesses say that there is a 70% chance of a city-flattening earthquake in the Tokyo area within the next 30 years...and I live just outside of Tokyo. Time to start thinking of an exit strategy, I think.

Oh, and a bit of cool bling.
Check this out. It's the Japan Quake Map site. It maps the Japan earthquake (the one that caused the recent tsunami) from the morning when a few small quakes happened, and through for a few weeks after. It's like watching popcorn popping. The size of the rings are the magnitude, and the color is the depth (the more shallow the quake the more destructive). Just for fun I put a red dot on the pic below so you can see where I am in relation to the main quake. 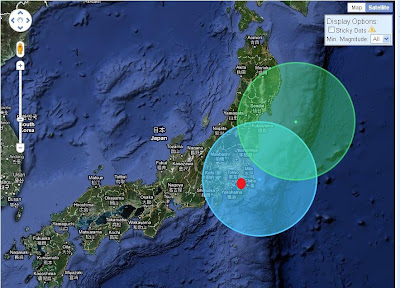 Click on the map, or here to jump to the actual quake site.
And for some extra fun, try increasing the playback speed on the top right (looks like DVD controls, but very tiny). Enjoy!
Posted by Mike at 9:27 AM

Hi Mike
Oops! Google Chrome could not connect to www.japanquakemap.com....

Thanks for the heads up. Still, try to check it out on FF or IE -- it's hella cool.