My 3.5 seconds of fame. Being a movie extra in Japan.

This is actually something that happened a few years ago. I was asked to help out as an extra on a Japanese movie, 純喫茶磯辺. Anything is worth trying once...once and never again. But at least I got my 3.5 seconds of fame...2 seconds of which was just the camera panning along my huge nose.

A few years ago I was out for beers with one of my publishers and two girls stopped us on the street. They were desperately looking for some "gaijin" (foreigner) extras to be in a movie. The name of the movie was "Jyun Kissa Isobe" (純喫茶磯辺). It was going to be a long day of essentially free work, but my editor buddy Yoshi knew the actor and their company and said it was legit...I was off the next day...so why not. "Yes," I said.

The next day I met up with the two women scouts and the 3 other foreign guys who would also be in the VERY short scene. After lunch, we were taken to the location, which was a basement level "izakaya" (kind of a Japanese pub) just up the street.

It was strange. ALL of the extras they needed for the day were sitting squished up against the walls while the staff ran around setting up the lights and stuff. I was with one of the producers who was ultra cool. He apologized for the delays. He said it was because of the budget, which only afforded them one camera. The director seemed to have his head in the clouds a bit and seemed to be making decisions as he went along -- nobody really seemed to have a clear plan of what was going on. Which is probably why it took 12 hours to make a simple scene. Luckily, we 4 gave an Academy performance (Insert laugh track here).

Here's the clip...Free beers if you can spot me...

The main actor guy is a fairly well known "tarento" named Miyasako Hiroyuki. They say "tarento" based on the word "talent" in English. Which is pretty funny, since an extremely small percentage of tarento actually have any real talent. Most of them have what is known as an "uri" -- a salespoint. It's usually some idiotic look or catchphrase that people can copy and forget that there's no talent underlying the uri. On set, he was pretty arrogant and basically ignored everybody except the 3 actors he was working with. Seemed a bit of a douchebag really.

Other than him and the directionless director, most people on the set were cool. The guy playing the waiter you see in the clip was awesome. He's actually an ice hockey player off set and a super nice guy. The lighting people and all of the extras around us were pretty cool as well. And of course, the women who had invited me to help out were fantastic with almost perfect English.

At the end, the actress who played the main female role, Kumiko Aso, asked if we wanted to take a "kinen shashin" -- a photo to remember them by. It was a nice gesture, considering the old Italian dude in the scene kept taking flash photos even during the filming -- can't believe they didn't get the guy playing the yakuza looking extra role to knock his teeth out. So it was a nice end to a long, but pretty informative and interesting day at the movies. 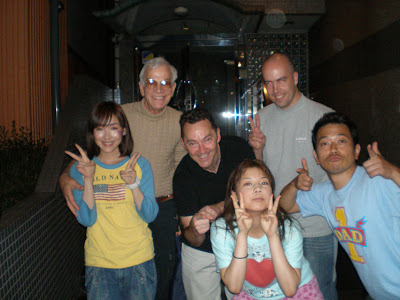 Disclaimer: No actors or extras were injured or abused in the making of this movie. ..That red punch mark on Kumiko's face is make up from a previous scene.

First of all, its been 20 min I m surfing ur blog and found very interesting. Gr8 job! I too interested in traveling. So loved dis blog. Travel in India is certainly became a boom and OTA's are doing a fab job for travelers. I found cheap air tickets booking or bus booking online is very convenient for me. Keep blogging. All d best