Japanese Taxes: What do I get for my tax yen?

I recently complained in a blog entry about the huge waste of taxes being used to support an amazingly inefficient public sector. And so it was an ironic turn of events when I found myself seeing the benefits of my taxes even as I was on my way to pay a late tax claim.

In a recent blog entry I tore a strip out of the inefficiency of the Japanese public sector. Having to watch 11 people getting paid to do one address change for me was just too annoying to ignore. So you can imagine my frustration when I got my notice a few months ago that the Oami tax office had neglected to take almost $5,000 of taxes from my pay a few years ago. I found out this gem when I was in getting the papers I needed to apply for my permanent residence visa. There's nothing quite so infuriating as paying a lump sum of cash at an office where half of the staff is chatting, slurping noodles at their desk, and mistakes are made at every turn.

But then I had a small revelation. And it came, rather coincidentally, when I was taking out money to pay this very tax bill. How much money? Well, as shown in the photo, it was about $2,500 (￥250,000) for this installment. Is this a lot of money? Well, it's not chicken feed, but it's not a lot...not in Japan. What is notable about this photo is that it is not a check or a bank transfer. It’s cash. Cold, hard cash that I withdrew from a convenience store ATM. At midnight, no less. And I put it in my wallet and walked home. Alone. Can you imagine doing that in any other country in the world? I certainly can’t. Not without an armed escort, anyway. But in Japan, walking around with cash is no problem because Japan is so safe. 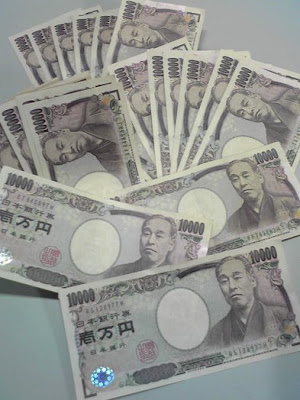 Ok, I admit. I was careful when I took the money out, thanks to my residual paranoia from being raised in a country where most people won’t even walk around with $250 in their wallet, let alone $2,500. So I made sure that the 7-eleven was mostly empty when I took out the money, and I did keep an eye on one guy who happened to be walking about 100m behind me. But mostly what was on my mind was, "Holy shit! I would NEVER do this in another country." It was a reminder that Japan is safe. It's so safe that I don't even think about it. Indeed, if you asked a Japanese person what are the "safe" and "unsafe" parts of Tokyo, I don't think they could give you an answer. Every place is safe. At least out on the streets. A lot of people seem to knife and hack their family and neighbors up in the privacy of their own home, but if you're walking in public, you can do so with no worries.

So I suppose in the end, I have something to be thankful about my tax money, or at least for having chosen to spend most of my adult life in Japan. In fact, it was really painful paying this tax bill. But I have to remember that I'm not just paying the salary of the guy with the 60s' hairdo picking his nose over his noodles at his desk at the Ooami Tax Office (yes, witnessed with my own eyes), I'm also paying for a system that allows me to work in a safe and secure environment. And you can't put a price on safety. So thanks for that one Japan. I owe you.